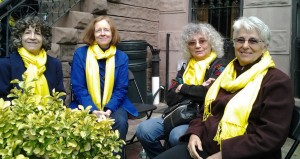 Sitting by a stoop in Prospect Heights, Brooklyn, with three other women, discussing gender politics—as an art form. The yellow scarves signal that we’re part of Between the Door and the Street, a work of socially engaged art by California artist Suzanne Lacy. We were among 84 groups on stoops along the block, “performing” our unscripted conversations for a large crowd that strolled the sidewalk, stopping and listening at different stoops as they chose. We stoop sitters represented a huge range of local activist groups. 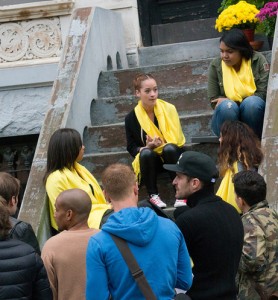 My own group’s subject was second-wave feminism—how it changed us, how it changed society—and what didn’t change. Women still earn less than men; they still take on more responsibility for house and children. Rape remains a huge problem. These facts tell me that even though women now take on roles they rarely had before—CEOs, elected officials, and so on—the underlying power structure remains intact. Moreover, despite all advances, women as women remain deeply problematic, for their sexuality and ability to generate life frighten men. This is no less true today than it was centuries ago when the witches were persecuted in Europe. It’s why feminists have asserted that rape is primarily an issue of power, not of sex (I wrote about this fear in my book The Women Outside).

The four of us on the stoop had a great time talking to each other, but except for a couple of moments when we got a laugh, I had no idea how people were responding. It was really supposed to be performance, and we’d been told not to break the fourth wall, so I tried diligently not to look at them. When at the end we were cued to go out into the street, we did talk to a few people, but those who had listened earlier and moved on were gone. I think this fluidity is a signature quality of Lacy’s work—very Buddhist.

Interesting phenomenon: so many women there looked fabulous, incredibly attractive. 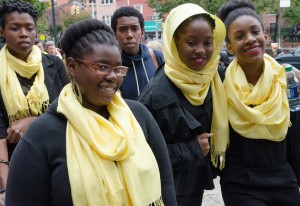 It wasn’t just that they knew how to put themselves together (although the scarf-tying creativity on display blew me away), but that they knew who they were. Beyond mere self-confidence, I saw a sculpting of their being, a refinement that showed in their features—a chiseled look arising from experience and the wisdom gleaned from it. Look through this portfolio of photos by local photographer Matt Weinstein, and you’ll get a sense of what I mean.

In the same way, when someone is a dedicated meditator, their practice often shows in their face, which appears both well defined and quite open—undefended, since the person has no need to feel defensive. There is no hiding, the full being shines out.

Such people have digested experience into something that nourishes spiritual health. The clothes, hair, and makeup on the women last Saturday all looked good because they knew who they were and weren’t trying to be someone. Not surprisingly, the real stars in this respect were middle-aged and older.