The other day I visited Occupy Wall Street in Zucotti “Park,” essentially a paved strip one block long between tall buildings. What struck me first was how dense it is. Little 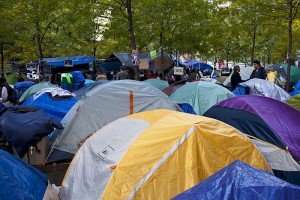 bubble tents are close-packed, with narrow aisles here and there so you can thread your way through. Almost all the square footage is taken up by these tents and by various organizational/ administrative booths: the “Think Tank” where seminars and lectures are held, the Library (writers, note: lots of real books), Information, Community Affairs, and Legal. A large hand-lettered sign listed a full schedule of activities for the day: seminars, speakers, actions. 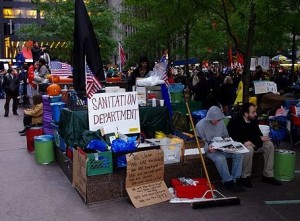 Not everyone was young. Middle aged and elderly people staffed booths, held signs, played guitars and banjos, wandered around in costume talking to visitors.

The low wall surrounding the park marks a marginal area where occupiers engage the outside world. Sign holders, musicians, people offering flyers present themselves to a lineup of onlookers wielding video and still cameras—many press people and lots of tourists. The site is only a couple of blocks from the WTC memorial, so the tourists make this another stop.

At the west end, on Church Street, I encountered a group of about 10 nattily outfitted senior citizens from Westchester, who had driven down to Fort Lee in New Jersey, then cycled into Manhattan. “We do this every year,” one man told me, so this year they picked OWS as their destination. He reminisced about the 60s, when construction workers beat up anyone with long hair. His group smiled quite kindly on the occupiers.

The level of organization and community structure in the park is remarkable. Signs hang from the wall: The altar, photo by David Shankbone

I browsed my way through the tents, behind a young man with dustpan and broom who was sweeping the foot-wide aisle between two rows. The occupiers represent a great variety of groups, ranging from far-lefties to the people who set up the altar that sits at the west end near the wall, on which at least one man sat apparently meditating. The photo shows one side of the altar.

I noticed several statues of the Buddha, images of Hindu gods and Kwan Yin, incense, plants, beads, pebbles, little medallions, an orange pepper, a photo of Gandhi (“he would have been here,” said its sign), feathers, pumpkins, the Virgin of Guadeloupe, Tibetan scarves. Nearby a trumpet accompanied a group of drummers. I dug out of my handbag a foreign coin that my colleague Mary, who sold me the purse, had slipped into a compartment for feng shui (never leave a purse or wallet empty, she advised me) and left it in the lap of a Buddha as a token from both of us.

Everything goes on against a background of continuous music: drumming but also guitars, in groups and solo. It heightens the heady, high-spirited atmosphere. Inside the park it feels like school is suspended for the day; there’s a rent in the fabric of everyday life allowing something extraordinary to flow in, something joyous and completely unprecedented. My question, like that of so many others, is: will this produce anything meaningful?

Wandering back along the other side of the park, I encountered a man holding a sign that read “I am not a protester—I am a change agent” being interviewed on video for a website. I asked what his sign meant. “This movement is different,” he said, “because what we need is a shift in consciousness. We can’t change the system using the same methods as past movements of the 60s, 70s, and 80s. We need to align our energy and attention with what we want to happen, not waste it on anger.” His name is Steven Morrison, and he teaches sessions in the park in what he calls the Spiritual Workout. “Everything is energy,” he says, and by increasing the number of people who make this shift in consciousness, we can actually shift reality—something he believes is already being demonstrated by the growth of the OWS movement.

Now I’ve heard all this before. In fact I’ve seen people who profess these same ideas stuck way up in the air, spinning a fantasy so enchanting that they quite lose their grasp on reality. Until reality proves intractable, and they hit the ground with a crash. So I couldn’t help feeling dubious.

Many commentators have asked, “What are their demands?”  Like others, Steven answers that these protesters aren’t making demands, because the system that exists isn’t capable of responding. Look at Congress. It can’t do anything.

This is true. We really do need a paradigm shift. So my question is: how do you keep your feet on the ground and stay connected to reality while doing what you can to make that shift happen? How do you know whether you’re lost in a dream world, spinning brightly colored wheels in the air?

I’m hardly the wise person on this, but my experience in organizing and political protest, plus my Buddhist training, suggest that at least one major component of any paradigm shift will be letting go of anger. Many people on the left learned activism as an expression of anger. Think of the vocabulary: Fight! Struggle! Outrage! And as a Buddhist would say, they’re still clinging to that anger.

When I worked with homeless women, I learned why anger feels so  good. Physiologically, it gets the adrenalin flowing; you feel empowered, invincible, righteous, alive.  You actually get addicted to the high. And like any form of attachment it prevents you from seeing clearly with what Buddhists call ‘wise discrimination.” You don’t notice that you aren’t really invincible—you’re not even all that righteous.

This week, some commentators suggested that OWS has indeed created a change: it’s shifted the public dialogue. The Obama administration wouldn’t have backed off the Keystone XL oil pipeline otherwise. A change in consciousness isn’t easy, and it doesn’t happen overnight, but despite my doubts I’m still hoping this time something really has shifted. Well, we’ll see.