Buddhist meditators practice experiencing the mind as a vast, clear sky, through which thoughts, feeings, and all other experiences pass like clouds, appearing and then vanishing in an open space of awareness that’s not limited to the inside of the head. (Meditation teacher Jack Kornfield describes this practice here.) 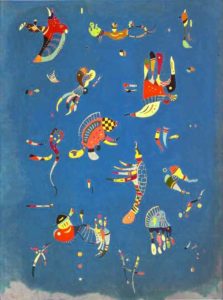 Wassily Kandinsky’s painting Blue Sky combines that image of the mind as vast open sky with an experience I’ve had when writing at a very deep level. Part of the conceptual work for my books about homeless women and about self-sacrifice was simply discovering what they were actually about. I came across incidents, articles, and books, and generated images from my imagination, that I knew were important, but I didn’t know why, or what exactly they meant. And normal-type thinking about them didn’t help.

So I’d lie down on my couch, close my eyes, and let my mind fall into a contemplative state, slowing down to alpha or even theta brainwaves. It wasn’t thinking, it was more like dropping a plumb line down into my gut. At some point an idea or an image appeared that turned out to be the basis for the missing concept (though it still needed a lot more mental work to be expressible in words!).

So Kandinsky’s blue background is that spacious mental field, and his little creatures and objects are the not-fully-formed glimmerings appearing and floating around in it: another bridge between meditation (which, unlike like my intention to shape an idea, isn’t goal-oriented) and writing.