Coming to this late, but I’ve been ruminating.

The People’s Climate March was perhaps the most enjoyable demo I’ve ever been on. Maybe partly because I marched with my Buddhist group, and our staging area was on a block of West 58th St with many different faith groups, including a variety of other Buddhists. That was a new flavor for me—in the past I marched with political groups.

At the back of the block where we were, during a looong wait before we got to start walking, people were friendly, even joyful. The crowd was so dense toward the other end, where there were speakers, that we never got close enough to hear what they were saying. I walked around where I could and checked out who was there. Here are some of them (click any image for a full-res view):

A woman from the Earth Initiative of the Zen Mountain Monastery told me her group was studying the beliefs of “the other side,” in order to avoid “liberal self-righteousness.” I loved that motive. Someone should do the same for leftist self-righteousness. Any self-righteousness is like a pair of blinders. We want to apply our spiritual values to how we treat the planet, but what about our attitude toward those who don’t agree with us? I remember a friend saying she loved going on demonstrations because you could yell at people at the top of your voice. Of course anger (of which self-righteousness is one form) may initially motivate us, but is it a good way to get people to change? 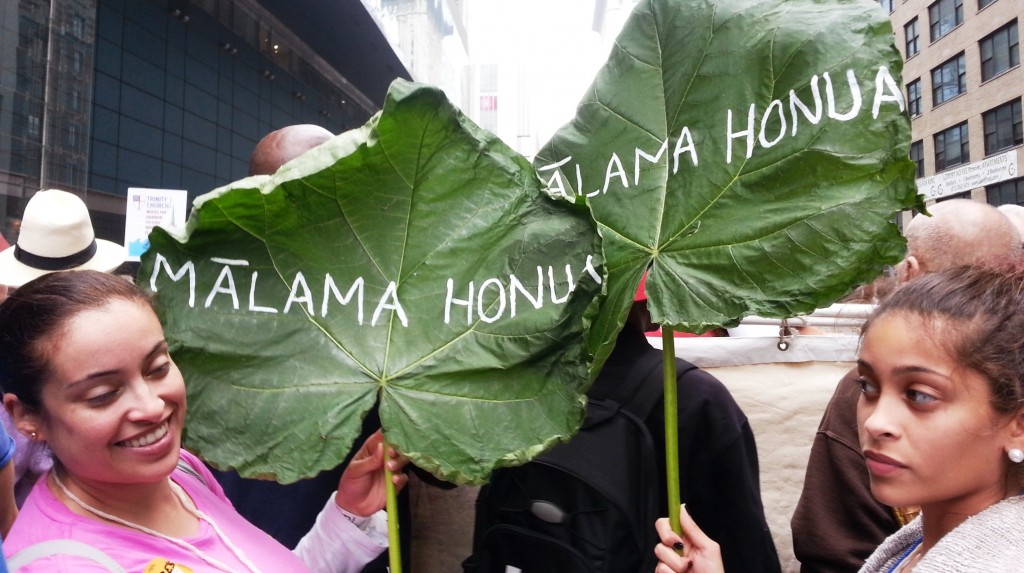 These words are Hawaiian for “care for the earth.” These young women carried the leaves for a friend who couldn’t be there. They themselves were marching with the Episcopalians. 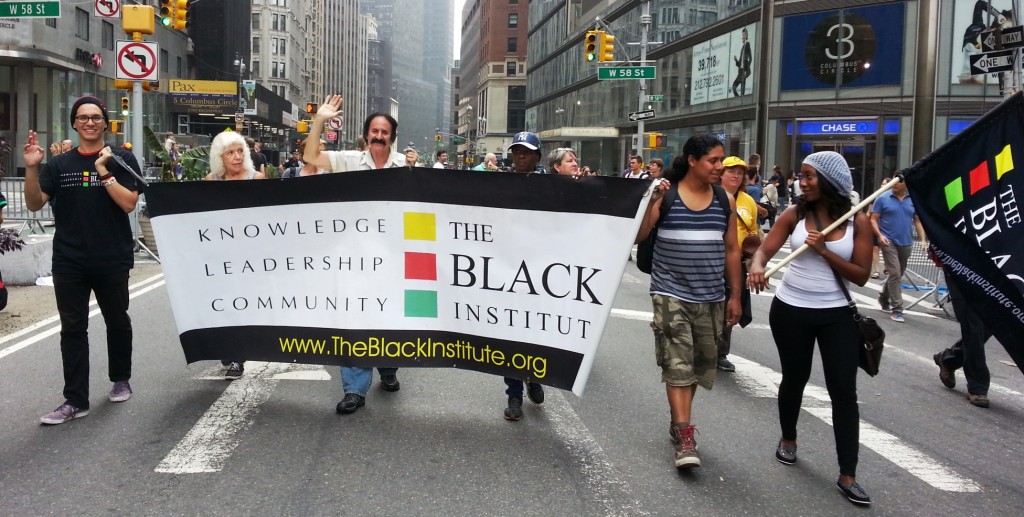 At last we got moving and merged into the larger demo which included many young people shouting the standard slogans: “Hey hey hey, ho ho ho, climate change has got to go!” “What do we want? Climate justice! When do we want it? Now!!!!”

But they weren’t angry and confrontational in the way I recall from demos dating back to Vietnam. The widely hailed “people power” of this march felt different from “Power to the people!”

The police too were different, especially in how they deployed barricades. I don’t know whether to credit Mayor de Blasio’s new policies or the nature of the march itself, but there was not that sense of being corralled and threatened that I felt at the antiwar demos of the past decade.

On the subway going home I sat opposite two women who had a shopping cart loaded with copies of the newspaper of a far-left political party. Open-heartedness evaporated, self-righteousness surfaced: my first thought was “Hah! Glad they couldn’t get rid of all those papers.” I avoided eye contact so as not to have a paper shoved at me and be proselytized. But as I got up at my stop they called out to me. I pretended not to hear but they persisted so I finally looked at them.

“What brand are your shoes?” one called out.

“Oh, we thought so,” she exclaimed, and pointed to her friend’s feet, sporting Keens in a different style. There would have been some shoe discussion, but I had to get off before the doors closed. So, a lesson in finding commonality even with hard-line Communists.

Then I came home and learned that a friend in California was standing by ready to be evacuated because the roaring King fire was blasting its way toward her house through a forest dry as tinder due to the long drought there. A nervous few days, until the wind cooperated and the thousands of firefighters controlled the blaze. I marched, but she suffered.