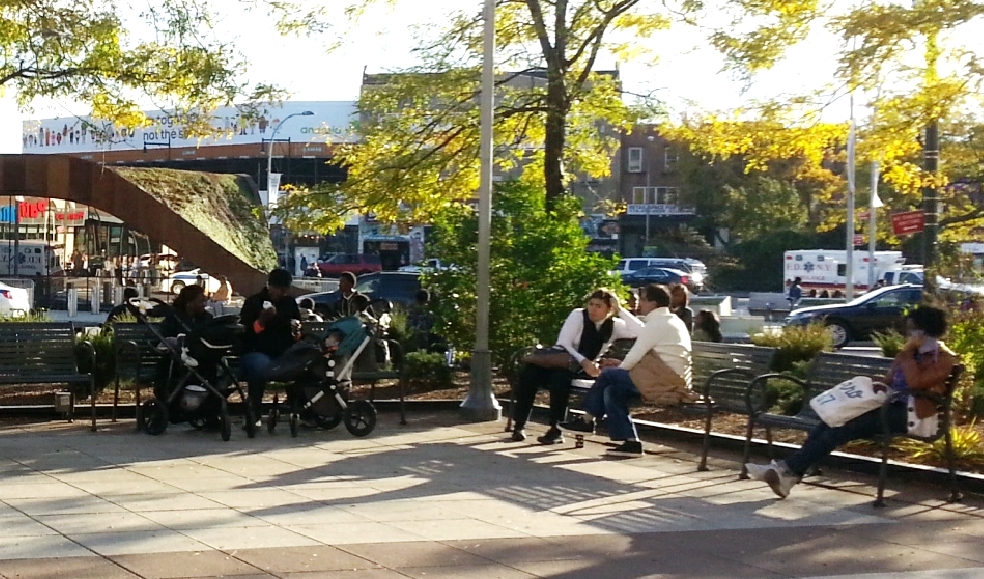 The plaza on a different day. Imagine us on the bench at the right, looking over at a bench on the left.

This fall I became a volunteer mentor for Girls Write Now, an organization that pairs New York City public high school girls who have a passion for writing with professional women writers who pass on their craft. I find myself going back to basics, trying different writing styles and genres; it’s a little like being a baby writer again.

My mentee and I began with exercises in the building blocks of writing: interviewing, note-taking, description. Last week, we did character description. We sat on a bench in a plaza outside a mall and picked out a man sitting a couple of benches away. For 15 minutes, we both wrote as minutely detailed a description of him as we could, then compared our texts. We chose a woman and repeated the exercise, this time trying to write in the other’s voice.

As it turned out, the comparison wasn’t that interesting, for we had noted pretty much the same items—clothes, details of face, hair, what the woman was carrying, what we thought the person was feeling—and made rather similar observations. What really struck me was how interested and involved I became in these two quite unremarkable people.

I had felt rather resistant to this exercise, perhaps because I associated it with fiction, which I haven’t tried to write in a long time, although I’ve done essentially the same type of description in my nonfiction. But it turned out to be intensely engaging. By the time we finished I was dying to know these people. The man appeared to be Latino, maybe 60, with a poker face; the woman was black, about 40, very well groomed and dressed, and looked tired. Each obligingly stayed put on a bench for just the 15 minutes we needed.

I see now that my shift from faint hostility to fascination resulted purely from the quality of attention forced on me by the exercise. Because of the set, almost grim expression on the man’s face I assumed he was bad-tempered. I kept watching, because I had to, and saw him smile at the antics of a couple of children running around; his expression changed completely. Suddenly I saw him as quite kindly.

We had guessed that the woman might be waiting for someone (since she looked at her watch), but then I thought: maybe she was taking this rest on the bench as a brief respite—time for herself before she had to go home, cook dinner, and take care of other people. The more I watched, the more I felt for her, shouldering these obligations after working all day. Maybe I was right—no one came, and eventually she hoisted her bags and walked off. But I wished I could have talked to both of them and found out.

So what generated this involvement? Simply: paying attention. There’s a famous story about Louis Agassiz, a Swiss naturalist who taught for many years at Harvard. His new students were presented with a preserved fish on a tin platter. He would tell the student to look carefully at the fish, then leave the room, not to return for hours. One student,

Samuel Scudder, wrote an account of being left alone with the smelly, hideous fish. He thought he had seen everything there was to see in that fish after 10 minutes; but after several hours, desperate, he had the idea of drawing it, “and now with surprise I began to discover new features in the creature.” But when Agassiz returned, and he proudly recited his discoveries, the professor said, “‘You have not looked very carefully… Look again; look again!’” And he left me to my misery.” With nothing else to do, Scudder started to see still more in the fish. Each time he gave Agassiz a new list of observations, the professor said, “That is good, but that is not all; go on.” The misery continued for “three long days.” Only later did Scudder realize “the inestimable value” of this lesson in how to observe.

And here was I, feeling pressured by having to observe for 15 minutes. After 10, I too thought there wasn’t much left to notice. What would have happened if I had extended my observation for an hour?

The lesson I draw isn’t the same as Scudder’s. It’s about a different effect of close attention: the emergence of interest, curiosity, empathy, even loving kindness. In meditation you are supposed to observe with nonjudging “bare attention,” without agenda or assumptions. I wasn’t even doing that—I had the opposite of an open mind—yet look how this brief exercise changed my mental state.