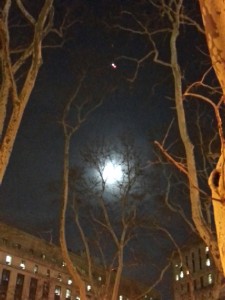 I’m posting this photo mainly because I like it. Visually it’s one of my better efforts, but I also see in it a certain irony: above the sweet full moon caught in the branches is a sparkly light that belongs to a police helicopter surveilling the demonstration at Foley Square in Manhattan the other night, protesting a grand jury’s failure to indict the policeman who killed Eric Garner.

Four thousand people (according to one report) showed up in the square (thousands more elsewhere in the city). Overall the action was peaceful; no die-ins blocking traffic that I could see. Lots of chanting about racist police murderers, but to me it didn’t seem nearly as provocative as “off the pigs” was back in the day.

Really interesting: This was a demo without a head: no speakers, no focal point. Instead separate groups across the park chanted and performed a kind of street theatre (like the marchers bearing coffins inscribed with the names of people killed by police—there were quite a few coffins). It worked; nobody got in anyone else’s way.

Apparently this decentralized structure—totally unlike last September’s climate march—was a direct result of grassroots organizing via social media. According to Mashable, “Some organizers believe that social media has given a new scale to the protests” (especially Twitter; scroll down for the hashtag map). I learned of it by email, but as I stood in the square I began to regret that I hadn’t yet put Twitter on my phone, so I couldn’t find out what was going on even on the other side of the park, where I couldn’t see. I had to ask the woman next to me, who didn’t know either. So last century.

The Times noted that the protests were “organized in one way” but also “unpredictable.” As one protester explained, though the gathering location was chosen, the rest “happens organically.” This fluidity is new. And I realized that I liked the absence of the usual long parade of speakers, carefully divvied up among the groups sponsoring the event. It’s a new form of protest, like Occupy, so we’ll see whether this new practice produces a more organic result.

In any case it was heartening to see such numbers, and such a wide range of ages, races, genders, and backgrounds—and especially so many young people. 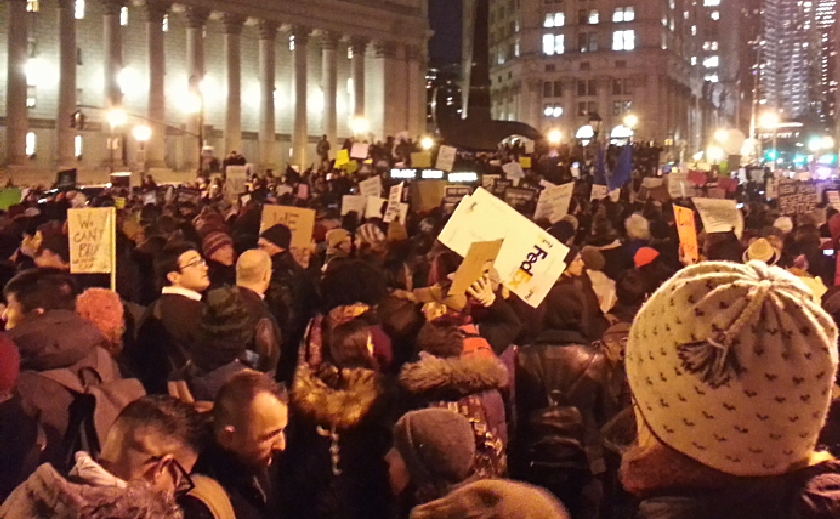