Some years ago I was walking down a city street with a male friend. We passed a shoe store, and my head swiveled involuntarily to check out the contents of the window.

“What is it with women and shoes?” he exclaimed. “Why are you so fascinated by them?”

Good question. It came up again when I saw an exhibit at the Brooklyn Museum aptly titled “Killer Heels,” which made it evident that the answer is: power and sex. 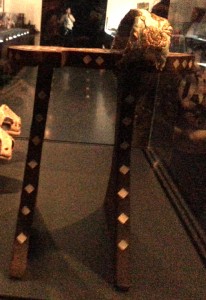 Chopine from Renaissance Italy. They could go as high as 20 inches.

It turns out that people have been making and wearing tall shoes for thousands of years, and centuries’ worth were on display—from ancient Chinese and early Renaissance platforms to the so-called Fetish Ballerine of 2007 by Christian Louboutin, whose 8-inch heel put the wearer’s feet in toe-shoe position (“only made for lying on your back,” says the designer, although a photo showed a woman apparently walking in them). And the themes hadn’t changed at all.

In the past, high-platform shoes denoted wealth and high status. And in a contemporary video at the exhibit, the camera looked up at the stern, contemptuous faces of women stomping their pastel-hued stiletto soles down toward it, as female voices insisted that heels made them feel more powerful and commanding—not to say potent. 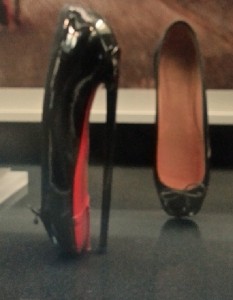 But much of the significance of tall shoes isn’t generated by women—it’s projected onto them. Another video showed scenes of sadomasochism: two long fishnet-sheathed legs using their pointy-toed black stilettos to demolish—in the most deliberate, pitiless way—a bright red toy car. Once it was in pieces the scene switched to another pair of legs wearing two different black dominatrix heels—one bristling with spikes—walking across the naked chest of a gorgeous blindfolded young man lying supine. (Although the body they belonged to was presumably suspended by some sort of harness, since the heels didn’t sink into his flesh.) Fetish indeed—complete woman not needed.

Certainly the entire exhibit was drenched in sex, from the curves of heels, calves, and arches, punctuated by strategically located straps, to the suggestive vulnerability of women teetering on heels so high they could barely move. In an old film, fifties pinup star Bettie Page slowly pulls on her stockings, rolls up her garters, then holds each 5-inch heel up to the camera like a priest elevating the host, before ceremoniously sliding it onto a foot. The climax: she stands and totters a few steps.

Portrait shoe, 1990, by Vivienne Westwood: “Shoes must have very high heels and platforms to put women’s beauty on a pedestal.”

While the exhibit was heavily dedicated to celebrating current designers (it was sponsored by Nordstrom and W magazine), the museum conscientiously covered the downside as well. Another video (so excruciating I couldn’t watch it all) consisted of closeups of bruised flesh being squeezed into pumps that cut into it painfully, accompanied by loud gasps and moans on the soundtrack. I stopped wearing heels years ago—I couldn’t handle the pain. But 43% of women surveyed recently by ABC News kept wearing heels even though their feet hurt all the time—because, as one put it, “They make me feel great!” (That is, sexy.) Another: “They lift everything up! Well, not everything.” Very true. Last year I got a pair of ankle boots with soft flexible soles and a tiny one-inch heel, and I love them—they make me feel great.

I’ve learned that not all males are immune to shoe obsession, like my friend. Winkie Ma, my teenage writing mentee, reports that young guys are obsessed by sneakers. They covet the latest style, the brands that sports stars wear, and they take care to prevent any speck of dirt from landing on them. She pointed me to YouTube videos of “sneakerhead” culture, where a “limited edition” pair can go for $1000 or more.

Still, I have a feeling the motivation isn’t quite the same. And besides, you can even run in sneakers.