A six-by-three-foot foot. It sat like a huge bench right by the elevators at the Asia Society, part of an exhibit titled “Pilgrimage and Buddhist Art.”

This gigantic stone carving of the Buddha’s right foot, inscribed with 108 auspicious symbols, packed a wallop, more than anything I saw in the exhibit rooms. It felt personal and close, as though the Buddha had just been there, striding through the lobby on his way to the galleries. You could sense the sculptor’s pure longing to feel his presence. I had never seen a Buddha footprint before, and went home to figure out why it moved me so. 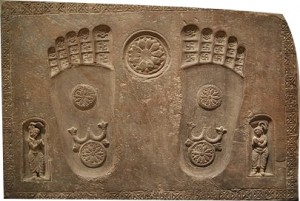 I did some research and discovered that Buddha footprints (buddhapada, in Sanskrit) are quite common. Both artist-created footprints and “real” prints—foot-shaped impressions on rock, believed to have been made by the Buddha himself—were and still are objects of devotion throughout Buddhist Asia. (The image at the left is of second-century Buddha footprints from northern India at Yale University Art Gallery; the one I saw at the exhibit is here.)

In fact footprints (handprints too) have been created and venerated across cultures and history all over the world—from the Chauvet caves in France 30,000 years ago to a temple in Syria dating from 10,000 BCE to the prints of movie stars outside Grauman’s Chinese Theater in Hollywood. One famous “natural” footprint, at the top of Adam’s Peak in Sri Lanka, is claimed by Buddhists; by Hindus (as the footprint of Shiva); by Muslims (as the print of Adam); and by Christians (as the print of St. Thomas the Apostle).

There are also footprint paintings. Many Tibetan thangkas (paintings on cloth) include the actual handprints and/or footprints of the lamas they depict. But it was the three-dimensional carvings, conveying as they do a sense of the Buddha’s corporeality, that touched me most.

So I started thinking about feet. I read about their symbolic, metaphysical, and psychological associations, the ambiguous nature of the footprint as indicator of both presence and absence, mortality and divinity.

Scrolling through the “Buddha’s Footprint Inspiration Gallery” on a tattoo website, I found:

[The footprint] reminds us that the spiritual life has its feet on the ground, and that while we aspire to “transcendence,” we should never lose awareness of the material plane of existence. At the same time, a disembodied foot speaks of Buddha’s absence, the absence of the human personality, and by extension, his non-attachment to this life.

I love symbols, so I found all this fascinating. More:

But none of this really answered my question.

Finally I found a report by Faxian, a fifth-century Chinese pilgrim traveling through India. He came across a buddhapada that changed size depending on who observed it. It was either long or short, noted Faxian, “according to the thoughtfulness of a man’s heart.”

“It exists,” Faxian added, “and the same thing is true about it, at the present day. Here also are still to be seen the rock on which he dried his clothes, and the place where he converted the wicked dragon.”

So perhaps the footprint I saw—which I’m happy to note was pretty long—helped open my heart. It tamed whatever dragon might be making me feel more wicked than I needed to be.