Of course not. I typed it on my computer keyboard. But have you noticed how commonly pen is used to mean write? In this age of the keypad and touch screen, pen is such an anachronism that it jars me every time I see it. 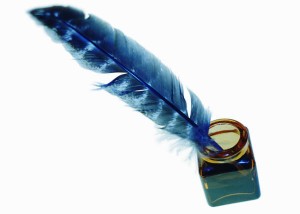 The Wall Street Journal noted last December that Cyndi Lauper had “penned an essay for Rolling Stone” describing how going off the fiscal cliff would harm LBGT youth. The New York Observer reported that former Lehman Brothers vice chairman Thomas Russo “has penned a book about this country’s pressing financial calamities.” A blurb for The Now Revolution, a book telling businesses how to use social media successfully, exclaims that the authors “have penned a book that truly isn’t a social media book.”  And the writer of a website touting the benefits of posting articles to content mills in order to create inbound links to one’s own site actually titled his site “Penned Articles.”

I’m guessing that none of these people wrote by hand.

This breezy usage of penned irritates me, maybe partly because I’ve been “penning” less and less myself. Initially, the physical connection between brain and pen in hand was integral to writing. Then I began typing first drafts directly on a typewriter and editing them by hand. I’ve now reached the point where the last few books I wrote stayed entirely inside the computer—no printouts. The brain-hand connection still exists, but through the fingers on the keyboard.

It’s interesting how language changes, creating this disconnect between a word’s current usage and its original meaning. Pen dates from the 14th century and comes from the Latin word for feather, the original writing instrument being a quill. The notion of a pen as an object held in the hand that uses some kind of fluid stuck, even as writing implements became metal pen points, then fountain pens, then ballpoints. It stuck so tight that we continued to “pen” books with typewriters, and now with computers. 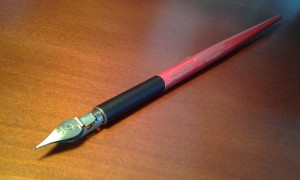 I once had an Israeli client who relished his excellent command of English and loved pointing out to me how Americans’ usage of certain words was incorrect, because, he insisted, their etymological meaning was quite different. Mindful of my English-major course in the history of language, I pointed out in return that languages evolve over time, so the meaning of words naturally changes. Thus presently used to mean at once, but now means in a while. Fast originally meant immovable; now it most often means rapid.

My client was quite unmoved by this argument, perhaps because modern Hebrew is a new language. Hebrew had been used only in a religious context for centuries, so when the settlers in Palestine revived it as a living language in the early 20th century, they had to invent many words for contemporary ideas, objects, and actions, often derived from word roots. So Hebrew hasn’t had time to evolve the way English has; the new words are still close to their etymological origins.

Normally I enjoy seeing how a word changes. But I want penned to go away.