Many old houses in Brooklyn’s brownstone neighborhoods have beautiful ironwork enclosing their yards. For example: 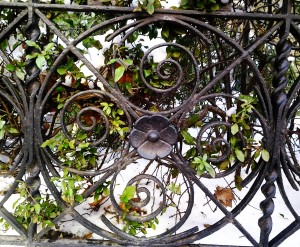 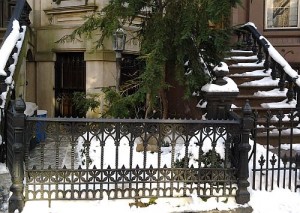 (Click the photos to see the details more clearly.)

First-floor windows, easily accessible from the street, often have iron grilles to prevent break-ins. These too are often quite handsome. 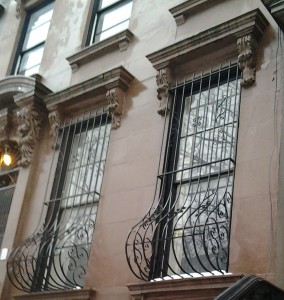 Years ago I played host to a group of visitors from a small town in Ohio who laughed merrily when they saw similar grilles on houses on the Upper West Side of Manhattan. They couldn’t get over the idea that all these people were putting themselves behind bars. Imagine living like that! I’d gotten used to seeing them and remember feeling rather defensive.

But not long ago I came across the house below, and found myself in the same position as the giggling Ohioans.

I don’t know who lives here so have no idea when or why the current owners (or earlier ones) put up this structure. At the time the neighborhood was likely unsafe and prone to break-ins. Just last summer, a couple of blocks from this house, I noticed some damage to rose bushes planted in tubs along the sidewalk. A homeowner told me that a bunch of kids had come through the night before and turned all the tubs over. There was nothing to steal, they just wanted to ruin something.

Still, this stockade sticks out on its block, since the other houses have the customary low fences. From a bystander’s point of view, it looks pretty unfriendly.

So I let my imagination weave itself around those bars. I’ve long been interested in the powerful current of individualism in this country and how it shapes our character, politics, art, and economy, and in particular contributes to the way we define our sense of self. To me this fence evokes a self that wants to close itself off and clearly demarcate the boundary between itself and everything else. Is that a healthy sense of autonomy—or is it like living in a cage?