Have you noticed that when you’re deeply involved in something, you turn into a magnet for anything related to it?

I once interviewed Kay Gardner, a musician and composer of healing music (sadly, she died in 2002), who told me that during a time when she was intensively exploring the physical effects of sound—teaching experimental workshops and reading extensively—all sorts of information found her. “People sent me books and articles. Books would fall off shelves. A book would be handed to me through a crowd—just a disembodied hand like one of the aces in the tarot deck.”

In that state of focus, you become like flypaper—things sail in out of the universe and stick to you. That’s what it feels like, anyway. To take just one example: writing my book on homeless women, I struggled to untangle some complex ideas about what these women meant to people inside society. I was tackling a chapter about mental illness—which I was choosing to call madness, a term that gave this condition a lot more meaning.

One bright Saturday afternoon, walking down my block toward a nearby park, I came across a stoop sale, which included a bunch of books. (In my Brooklyn brownstone neighborhood, we don’t have front yards, but everyone has a stoop, so that’s where we set the items out.) I was tempted, but figured I’d check it out on my way back. 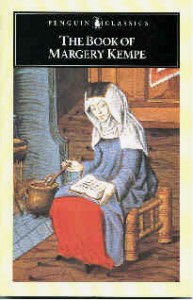 Not the book I found, but Margery's autobiography

A couple of hours later, the sale was still going on. I stopped and glanced through the books. A little paperback caught my eye: Six Medieval Men & Women. Why that? I wasn’t interested in the Middle Ages. But I picked it up. It consisted of brief narrative accounts of the lives of six notable characters. One was Margery Kempe, and I guess some significant aroma wafted up at me from the page, because I paid the quarter or whatever they wanted and took it home.

Turned out that Margery was a 14th-century woman who in her extraordinary eccentricity amazingly resembled the shopping bag ladies I worked with at a shelter for homeless women, down to her patchwork dress, her hysteria, and her loud proclamation of truths from God that she alone was privy to. Unlike them, though, she fit into a defined social niche: recognized as a minor mystic, Margery went on pilgrimages, conversed with learned theologians, and was appealed to for help at moments of crisis, as when the local church was endangered by a fire (she saved it). She died peacefully in her home town at an advanced age.

This brief story was the key not just to that chapter but to other large chunks of my book. I couldn’t believe how lucky I was that I happened to pass that house on the day someone decided to hold their sale, and that no one else snatched up the book while I was in the park. But was it really luck?

I’d call it synchronicity, and it’s one of those unexplainable but absolutely reliable mysteries of writing. When you’re obsessed with anything, you become a magnet for it. Who knows why—I’m just grateful. And would be happy to hear more examples of this phenomenon.