This month’s assignment for my Girls Write Now mentoring program  was “found poetry.”

There are several ways to “find” a poem, but our assignment was an “erasure poem,” where you take an existing text and black out lines and words. The poem is what’s left, rather like Michaelangelo and the block of marble.

I was in a stream-of-consciousness sort of mood, so I  downloaded a transcript of a Trump campaign speech, and to my surprise—since I’m in no way a poet—produced something that I rather like. (WordPress doesn’t let me reproduce the line breaks nicely, so I turned it into a photo, below.) Just to give you an idea of how it works, below the poem itself is one worked-over page from the original. The transcript was five pages, and I used only a few fragments. I inserted some punctuation, but didn’t change the order of any of the pieces of text. 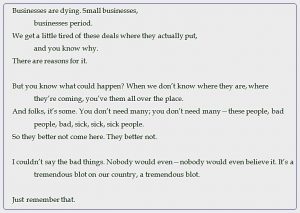 I had so much fun that I did a couple of others which I’ll put in the next post, along with some ideas about why this worked for me, while actually writing poetry doesn’t.