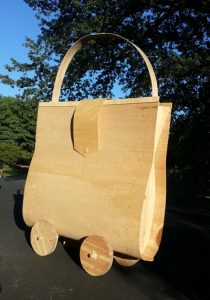 This ten-foot high wooden purse on wheels was part of a week-long art festival in Prospect Park, Brooklyn. Happily for me the artist, Ethan Crenson, was on hand the day I came upon it, conducting dialogues with curious passersby.

Why a “Trojan” purse? Was it filled with some kind of subversive material? No, Crenson told me. It was empty. The idea was that everyone could project their own feelings or ideas into it—anger at capitalism, the political system, whatever. I didn’t ask him why he’d chosen to make it a purse—probably because my own imagination immediately supplied a rationale.

Betty Lehan Harragan’s wonderful book Games Mother Never Taught You: Corporate Gamesmanship for Women was published in 1977, at a time when the first generation of women were trying to rise through the ranks in corporate America. It was a primer for these would-be executives, who found themselves baffled and frustrated by a set of mysterious rules of the game that all the men knew to follow. They played their positions and scored, while the women fumbled and dropped the ball. Aside from revealing these unspoken rules, Harragan offered brilliant advice to enable women executives—whose mere presence was then an unsettling anomaly in a corporate workplace—to avoid inadvertent behavior that would disturb men even more.

One of her cautions: never bring your purse into a meeting or business lunch. Men, Harragan explains, unconsciously equate a woman’s handbag with her womb, and seeing it in a business setting disorients them. A purse is acceptable when a woman is present as a sexual/reproductive object. But the message it telegraphs in a business setting is fatal to her attempt to be accepted as one of the team.

Of course many feminists of the seventies had no interest in the corporate boardroom, but learning how the system worked enabled us to use it to pursue our own objectives. I worked for a book publisher, and Harragan’s explanation of the male perspective on asking for a raise was a revelation to me. They expect you to ask, she said. And ask for a lot—they don’t get mad, they respect you for it even if they say no. I screwed up my nerve, followed her scenario exactly—and got myself a raise that allowed me to work part time and write my first book. (I didn’t even have to negotiate—they just said yes! I should have asked for more.)

I don’t know what other projections Ethan Crenson heard that day, but I’ll bet there were a lot of them. Like a womb, an empty space has a generative power.