“Reflexology” by PradaDearest, used under CC license 2.0, cropped from original.

Into your little toe, at least.

During twenty years of writing with master body therapist Yamuna Zake, I’ve learned to keep my feet healthy. Key is maintaining the space between the toes, normally squished together by shoes. I use both Yamuna’s techniques and my yoga practice.

For example, before doing some standing poses I always spread my toes with my hands. As I did this recently, an exercise from a book Yamuna and I wrote (The Ultimate Body Rolling Workout) popped into my mind.

Back when we wrote the book, I couldn’t do it. But this time, to my amazement, I could. 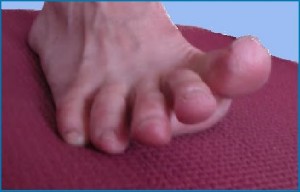 What thrilled me was not so much the muscular feat as the sense of differentiated awareness that came with it. Before, my five toes felt like one big toe. I could only raise and lower them as a unit—maybe with a fanning movement that brought the big toe down last.

But now I discovered a thread of awareness running from my mind into each separate toe, as though a set of nerves that were asleep had woken up and started transmitting signals. I could instruct each toe to act on its own, even the tricky, recalcitrant 4th and 5th.

I once interviewed Bonnie Bainbridge Cohen, a movement artist and therapist with a seemingly unlimited ability to develop an exquisitely differentiated, conscious connection to every tissue of her body. In a workshop I attended she instructed us to “move from your lymph.” Completely bewildered, I asked her later how such a thing was possible. You can develop an awareness of any organ or tissue in the body, and move it, she explained. You can move your little finger because you have an inner sensory awareness of it. In the same way you can develop sensory feedback from your lymph fluid—or your blood, or cerebrospinal fluid—and move that.

I’m pretty far from feeling my lymph, but I now have that inner sensory awareness of my toes.

And, what’s really intriguing: if I can do this with my toes, why not anything else? One of Bainbridge Cohen’s students told me he could feel into the cells of his heart. Another said she could feel into her brain.

And, beyond the body—how much farther can awareness expand? How fine-grained can we get? In the previous post I described a group session with the awakened teacher Jean Klein. Klein kept referring to the notion of the separate, individual self as an illusion, and one man began to argue about this. Finally Klein told him, “I don’t experience any distinction at all, even a physical one, between you and myself.” The man was sitting a good 50 feet from him. Klein was saying that having completely let go of the identification with being an individual self, he felt literally one with everything and everyone.

Physicists say that atoms consist mostly of empty space. A chair, say, contains more space than matter. But we experience it as solid. What I imagine is that Klein could perceive the basic energetic substrate from which we all arise, which temporarily assumes each of our various forms until we pass on, like waves in the ocean. From this view, the individual self, the “me” that we take as such an absolute, undeniable reality, does not seem solid.

It’s quite a way from talking to your toe to living in such a state of expanded awareness. But even the slightest evidence that it’s possible is so inspiring!