In the early 1990s I had the wonderful fortune of spending time with Jean Klein, a teacher in the Hindu Advaita tradition. Klein grew up in Czechoslovakia and Vienna between the wars, studied medicine and music in Berlin, then when the Nazis came to power fled to France and Algeria. He left Europe in the early 1950s for India, where he met a teacher and experienced a complete awakening. He returned to Europe and began to teach himself. 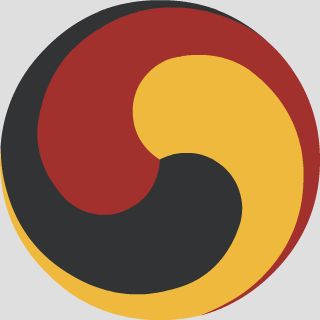 The gankyil, a Tibetan Buddhist symbol of nonduality. By Kava09 and authors of File:Korea-Buk-01.jpg, File:Sam Taeguk.svg (Own work) [CC-BY-SA-3.0 (http://creativecommons.org/licenses/by-sa/3.0)], via Wikimedia Commons

At the time I encountered him, I had little experience or intellectual knowledge of Advaita, Buddhism, or meditation, so my reaction was pretty naïve—not a bad thing, I guess. What I mostly remember was the extraordinary experience of being in his presence. It is amazing to be with someone who has no agenda, no needs, no defenses or barriers, no fears, no expectations, no anger, but only total openness, acceptance, and loving kindness. You can actually see the meaning of that puzzling Buddhist term emptiness. It’s as though the personality is transparent. (At one session, Klein remarked that “the personality is a tool you use when life asks. Then when the situation is over, you lay it down and it’s not there.”)

Advaita sees the entire universe as one undivided reality; its nondualist teaching resembles aspects of Buddhism. Meetings with a teacher take the form of dialogues.

One dialogue I attended took place just before my first book was published in 1992. About to leave for a mini-book tour in California, I alternated between states of expansive excitement and contracted fear. I got up the nerve to ask Klein about this.

He slewed around in his chair to look at me and said, “Ask the question more precisely.”

I explained that I was about to do public speaking and could feel my energy expand because I was happy that people appreciated my work. Then I’d get scared and contract. I didn’t mention that the “work” was a book.

“You want the appreciation,” he said. “You were seeing yourself as a doer.”

He looked at me and said, “If a man writes a book, he’s not really writing that book.”

I knew instantly that was the heart of the issue. “Well,” I said, “I’ve written a book, and I know I didn’t write that book—but I forget.”

He looked at me a few moments longer—there was immense kindness in his gaze—but said no more, likely because he saw I had gotten it.

And I did, at least in my mind. I’d forgotten the awareness I had had, during the process of writing, that the book was actually coming through me. Instead I saw my self being “the author” and my fear was of that identity being undermined.

My fear didn’t all drop away after that. I remember vividly how petrified I was the first time I sat in a radio broadcast studio waiting for the host’s first question. Yet during that segment, as well as the later interviews and talks I gave, I found myself responding out of a space much like that mysterious source of writing (described in this post and this one). My answers were far more skillful than if they had been formulated purely by my intellect. To put it as Jean Klein had, I wasn’t really answering those questions. The question to ask then is: who was?

Find out more about Jean Klein here and here.